I had fought with myself on if I was going to have an ultrasound or not since I knew that I wanted it to be a surprise on what we were having, because the baby’s heart was great, and everything was measuring fine.  But, one day I just told Dave, “Oh yeah, I made an appointment”.  I decided that I wanted to see the baby and that it had in fact grown from a little bean into something with legs and arms.  I was going to be having the ultrasound done at Baker college by students (of course their teacher is there too).  My midwife told me that I would be there for at least 45 minutes since they go over everything.

The morning of my appointment I was really excited and really getting anxious about giving in and seeing if the baby was a boy or a girl.  Once we got in we found out that we would have 4 students practicing since I was the only pregnant woman for the day. It was really neat because they were talking about everything they were looking at and we learned a lot, much more detail then when you go to a hospital or Dr’s office.  We ended up being there for a little over an hour but it was wonderful! We were also amazed how much the image improved even in the last 4 years!  We watched the baby as it “practiced breathing”, stretched, and moved and was hilarious for me because I could see the movement at the same time I was feeling it.  I think Charley’s favorite part was when we were making sure she saw the baby’s hand by it’s face and then just as we said it the baby waved, everyone was laughing!

They wanted to know if the baby was a boy or a girl so they would turn the screen away from me so I couldn’t peek and they all agreed on what it was.  It drove me crazy when they were all looking but after a minute I was okay with waiting again.  When the third student went she was talking about how long the baby’s legs were and how they had never seen a baby stretch out like that.  Sure enough as I was looking I noticed legs and an umbilical cord but there was something else, just for a second though so I didn’t say anything.  As the last student was going Dave kept letting me know that if I was gonna find out it was my last chance, I decided to let Charley make the call, she (who has wanted a sister the whole time) said,” A boy”.  After being pretty sure that I saw the evidence anyways I said go ahead and tell us, so they showed us that it was in fact a boy. Although, I have known in my heart that it was a boy my whole pregnancy I will say I was worried about Charley being upset about it, but she wasn’t and she smiles every time that someone mentions her having a brother.  I do believe that her spending a couple days with my Aunt and her new baby boy helped open her mind about having a brother, so thank you Mishelle for having your little man the week before my ultrasound!!

As much as I wanted it to be a surprise I am relieved to know that I can stop thinking of boys AND girls names and now I can go through all of Charley’s clothes that I had been saving.  After seeing the baby’s hands, feet, and even his cute little nose on screen I am so excited to meet him in person!!! 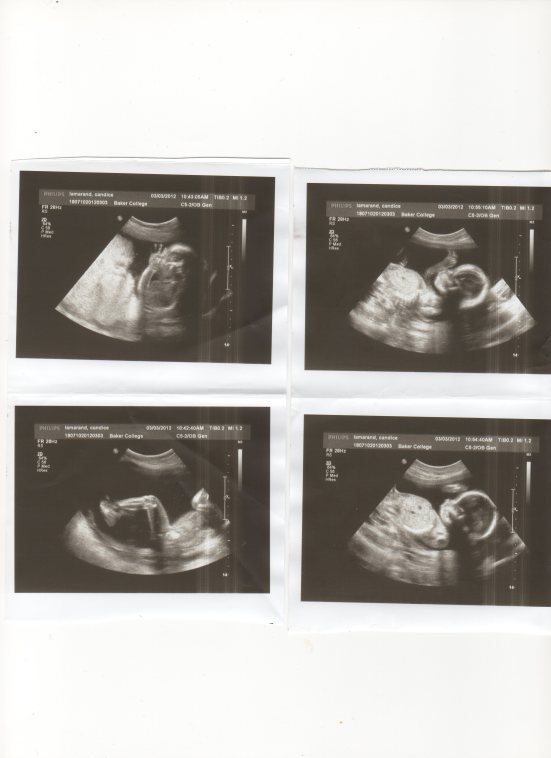