I originally met Laura as her wedding photographer, she quickly turned from client to friend. I was very excited when her and her husband, Jason, said they were expecting!  We chatted lots about pregnancy during that time, I photographed her maternity pictures in November and most recently had the honor of them wanting me there during her labor and birth of her baby.

Laura wanted a natural delivery, as her due date came and went she was getting lots of pressure to be induced. She did not want to and every time I spoke with her I knew she could not relax or enjoy the anticipation of her baby because the stress of this.  She had an induction date scheduled for the day after Christmas(2 days before she was 42 weeks) but decided she was not going to go..she would schedule an induction the day she was 42 weeks (the last day her dr would even let her try to have the baby by herself)  After finally deciding to skip that she felt great and sure enough not long after she went into labor. She labored at home for a good 13 hours before going to the hospital at 3 am- she was 3 cm then. I got my camera bag packed, cleaned off my car since it had snowed, and put anything I needed right by the door so I could just run out if I needed to. I had her keep me posted and planed to head out when she was 6-7 cm.  Morning came and she was 6 cm before 10 am, I decided to head out then since I wasn’t sure if the roads would be bad and had a little bit of a drive. When I arrived they were trying to rest as much as they could.  She had gotten an epidural since she couldn’t cope with the pain as much stuck in a hospital bed hooked up to everything, but at least this way she could get some rest. After a few hours dilated to 6 they decided to start pitocin. She had one nurse that was great that encouraged her to still be switching positions and even allowing her to be on her hands and knees (baby was posterior so this position felt great for her). Of course when the Dr. walked in he was very confused on how to handle a laboring women in this position (and this is exactly why more Dr’s need to see natural births).  I stayed with them until almost 4pm. She was still dilated to 6 and although contractions were stronger at times it didn’t seem that any huge jumps in progress were going to happen in an hr so I decided to run home ( because I did not pack a pump and being a breastfeeding mom of a 4 month old more than 5 hours without pumping is not so fun) As I was driving she called me and told me that her Dr who was coming in at 5 would check her then and they made the decision if she hadn’t progressed anymore by then then they would take her for a c-section (so many flashbacks from my birth story!!). After I was at home and had feed my baby I received a call that she was still at a 6 and they were going to schedule a c-section.  I asked her if she was okay with this and through her tears she said she was.  I completely understand how she was feeling at that moment, I told her that she could still wait longer and not to feel forced but also reminded her of how awesome she had done and that she still let her baby decide when it was ready and she labored for a long time.  She was ready to meet her baby 🙂  Since I wasn’t going to be allowed in surgery I said I would wait until she was done and then head back up. I was just about to head out the door when Jason let me know they were done and mom and baby were doing well. Baby was born at 5:59 pm and was 8.3 lbs, 22″ long. They did not know if they were having a boy or a girl and wouldn’t tell me until I got there!! Jerks 😉  I arrived to Jason blocking the entrance asking me to guess boy or girl. I originally thought girl but had switched my guess to boy since her heart tones were always so much like mine with my son, after I said, “boy” he stepped aside and saw Laura holding their sweet baby with a little pink hat on. I instantly had tears in my eyes. Laura looked great and their baby was just perfect, she was the exact weight of my daughter too!   I took a few photos of them as they took in the beauty and love of their daughter and after baby had tried nursing they let their family in to meet her.  When I was walking back into the hospital I was thinking about how much I loved seeing my daughter’s expression when she walked in the room to meet her brother so I was very glad that I could capture their family meeting the baby for the first time. These are a few of my favorite images from yesterday. (the first is from when she was laboring and the rest are after baby) 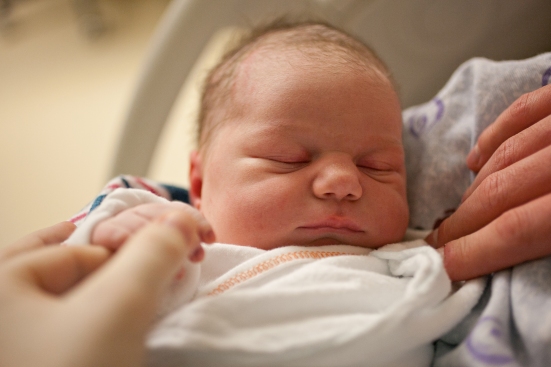 Laura and Jason I want to thank you for having me there with you guys at such an important time in your life. I am so excited for you to experience the wonderful, crazy road of parenthood.  It is a love like no other.

Laura- As you were holding your baby yesterday you said, ” I always pictured myself as a mom….” I’ll finish that by saying you are already such a wonderful mother. I know I have told you a million times but you did awesome. I am so proud of you for standing up to those drs and letting your baby come on her own time.  You tried like hell and although your birth didn’t go exactly to plan with everything that you had to deal with it went wonderfully well.  I am certain that you will have your next baby natural and it prob won’t be too far off since Jason already made a comment about trying for a boy 😉 Keep up the wonderful work on making sure your baby is healthy and happy.

6 thoughts on “A birth story of a determined mama”